This blog was never intended as a political commentary, but there have been times when I must write something more topical.  This day is one of them.  One of our founding fathers and a signer of the Declaration of Independence, wrote to his wife Abigail on July 3, 1776 that he thought the day when independence was first declared (July 2, 1776) “will be the most memorable Epocha, in the History of America.—I am apt to believe that it will be celebrated, by succeeding Generations, as the great anniversary Festival. It ought to be commemorated, as the Day of Deliverance by solemn Acts of Devotion to God Almighty. It ought to be solemnized with Pomp, Shews, Games, Sports, Guns, Bells, Bonfires and Illuminations from one End of this Continent to the other from this Time forward forever more.” (edited per footnotes from https://founders.archives.gov/?q=Project%3A%22Adams%20Papers%22%20july%203&s=1411311111&r=1)

John Adams got the day of celebration wrong, since by July 4, 1777, the day the Declaration of Independence was adopted would become “Independence Day” beginning in Philadelphia on July 4, 1777 One could argue that August 2nd would work just as well as Independence Day since that was the day in 1776 when the document was signed.

But with all the hate, violence, and vile rhetoric of recent months, John Adams comment that Independence Day should be marked by “solemn Acts of Devotion of God Almighty” seemed especially appropriate.

Let us all remember this our anniversary day of adoption of the Declaration of Independence from the Kingdom of Great Britain with prayer and thanksgiving.

Lord God Almighty, in whose Name the founders of this country won liberty for themselves and for us, and lit the torch of freedom for nations then unborn: Grant that we and all the people of this land may have grace to maintain our liberties in righteousness and peace; through Jesus Christ our Lord, who lives and reigns with you and the Holy Spirit, one God, for ever and ever. Amen.

Lord God Almighty, you have made all the peoples of the earth for your glory, to serve you in freedom and in peace: Give to the people of our country a zeal for justice and the strength of forbearance, that we may use our liberty in accordance with your gracious will; through Jesus Christ our Lord, who lives and reigns with you and the Holy Spirit, one God, for ever and ever. Amen.
Almighty God, giver of all good things: We thank you for the natural majesty and beauty of this land. They restore us, though we often destroy them.
Heal us.

We thank you for the great resources of this nation. They make us rich, though we often exploit them.
Forgive us.

We thank you for the men and women who have made this country strong. They are models for us, though we often fall short of them.
Inspire us.

We thank you for the torch of liberty which has been lit in this land. It has drawn people from every nation, though we have often hidden from its light.
Enlighten us.

We thank you for the faith we have inherited in all its rich variety. It sustains our life, though we have been faithless again and again.
Renew us.

Help us, O Lord, to finish the good work here begun. Strengthen our efforts to blot out ignorance and prejudice, and to abolish poverty and crime. And hasten the day when all our people, with many voices in one united chorus, will glorify your holy Name. Amen.

O Judge of the nations, we remember before you with grateful hearts the men and women of our country who in the day of decision ventured much for the liberties we now enjoy [especially our forebearers who fought and died to establish this our nation and defend its preservation from foes within and without]. Grant that we may not rest until all the people of this land share the benefits of true freedom and gladly accept its disciplines. This we ask in the Name of Jesus Christ our Lord. Amen. 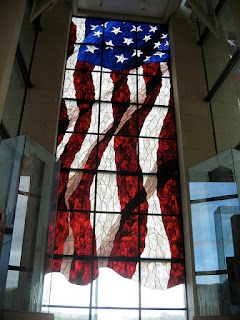 Since most do not know the words of Katherine Lee Bates poem: America: A Poem for July 4, I will post it below. Katherine Lee Bates was a professor of English at Wellesley College, my alma mater. Though some of us might change “brotherhood” to “sisterhood” in the version usually sung, and regret the unfortunate last line of the poem given how it could and would be interpreted in the 20th and 21st centuries, remember that this poem was written in 1893. With the music of Samuel Ward, it became probably the most popular anthem, after our national anthem. The last two lines were soon changed to, “And crown thy good with brotherhood, From sea to shining sea.”

O beautiful for halcyon skies,
For amber waves of grain,
For purple mountain majesties
Above the enameled plain!
America! America!
God shed His grace on thee,
Till souls wax fair as earth and air
And music-hearted sea!

O beautiful for pilgrim feet
Whose stern, impassioned stress
A thoroughfare for freedom beat
Across the wilderness!
America! America!
God shed His grace on thee
Till paths be wrought through wilds of thought
By pilgrim foot and knee!

O beautiful for glory-tale
Of liberating strife,
When once or twice, for man's avail,
Men lavished precious life!
America! America!
God shed His grace on thee
Till selfish gain no longer stain,
The banner of the free!

With the setting of the sun tonight, we will have our very splendid grand illuminations in the sky, though there may be tears this year and perhaps less pride because of current events, we can still ask, "God shed His grace on thee
Till selfish gain no longer stain,
The banner of the free!"

Posted by Apprentice at 1:42 PM

Apprentice
I have been reading about and looking at Trees of Jesse for over twenty years. Since it is unlikely that I will ever write a book, I thought I would share some of what I have learned as well as my own thoughts for others to comment upon. Agree or disagree as you please.